‘Dark Heart’ is the second book in the Jacaranda Dunne mysteries.

When the body of a well known film star is murdered during the Málaga Film Festival, the Guardia Civil once more turn to JD and her team for help. The crime is far from straightforward. The killer has left a trail of clues for the police to follow, but the question is why? And what is he trying to tell them? They can find no obvious motive for the murder of this popular actor, whose naked body was found in the locked basement of the Picasso Museum.

This page turning mystery takes JD and her team along a trail of dead ends and through the bloody world of terrorism, until they they discover the perpetrator was closer to home than they had realised.

From all Amazon outlets and other online bookshops.

He was beginning to feel the strain of the man’s weight pulling on his right side. ‘Come on, lad. We’re almost there. Not far now,’ he said, trying to move the semi-conscious man forward.

They stood waiting for the lift doors to open then propelled the unresisting man inside, where he slumped against the wall of the lift and slid into a sitting position. How heavy he was for someone so fit; there wasn’t an ounce of fat on him yet he weighed as much as an ox. No wonder they referred to things being a ‘dead weight.’ He knew exactly what that meant now. It took less than a minute for the lift to descend to the basement and then the doors opened automatically. They bent down and pulled the man forward; he was completely out of it now, and seemed to have become heavier than ever. For a moment he thought the young man was going to get stuck half in and half out of the lift, but one enormous tug on his arms pulled him through and he collapsed, splayed out on the floor of the basement like a rag doll.

He stopped to catch his breath then headed for the store cupboard where he’d left the sack trolley that morning. He took it out and wheeled it across to the prostrate figure. There was no point talking to him any more. He wouldn’t hear him. Which was a pity, because there were a lot of things he wanted to say to him. That was the only thing wrong with his plan; this man would never know who had done this to him, nor why. Somehow it took the edge off his revenge. He wanted him to know. How much better  it would be to face him and explain why he was doing this. Still the others would know. His father would know. That was the main thing. An eye for an eye.

Together they heaved the body on to the sack trolley and wheeled it across to the stone basins. A wheelbarrow would have been better, but that would have been hard to smuggle into the museum. He took a deep breath. Now was the hard part. They had to lift him into the ancient sink. As they hauled at the body, the man suddenly gave a groan. He froze. Was he coming round already? But no, all the man wanted to do was turn over and sleep. They waited a moment to be sure he wasn’t going to wake up, and then half lifted, half pulled the inert body into the stone bath and pushed him into position. For a few minutes he stood looking at the unconscious man, savouring the moment. Already he felt the satisfaction of what he was doing, but there was still more to be done. The best was yet to come. They set to work removing the man’s clothing; that was a lot harder than he’d anticipated so he was glad that he had help. At first the body resisted any of their efforts to move it; the limbs were stiff and unresponsive but gradually they relaxed. Nevertheless he was sweating by the time they’d removed the man’s Armani suit, his silk shirt and his Versace boxer shorts. What that man must have spent on clothes. Well they were no use to him now, not where he was going. He saw his companion look at them covetingly but he shook his head, and motioned for him to leave. He didn’t want them to get caught for such a trivial mistake. He smiled to himself as he folded the clothes carefully and placed them on the ground next to the young man’s handmade shoes; he’d been brought up to treat things with respect. His companion had returned to the lift. He waited patiently until he heard the lift doors close and he knew he was alone. He turned to look at the naked man, relishing what he was about to do, then he took the knife from his coat pocket and leaned over and stabbed him in the chest. The knife descended once, twice, again and again, faster and faster, and with each thrust of the blade he felt his pain and anguish ebb away. At last someone had been made to pay, maybe not the one he would have chosen, but he would do for now.

other books in The Jacaranda Dunne Mysteries 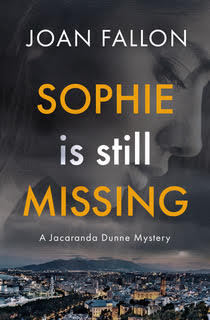 ‘Sophie is Still Missing’ is book one in this new series of detective novels by Joan Fallon. Dark, thought provoking, yet light hearted in places, this intricate mystery delves into