This series of short, frank interviews gives a dramatic picture of what it was like to be a woman living in Spain under Franco’s regime.

In “Daughters of Spain” women of various ages and from all strata of society relate their experiences and in the process illustrate how the lives of women have changed dramatically since his death.

‘I told them that it was wrong; that I was the mother, but they wouldn’t listen.  How could they put “mother unknown”, when I was standing there right in front of them?’  Jeannette.

‘When they came into the university you hid anywhere you could.  It didn’t matter if you were guilty of anything or not, you were still beaten.’  Ana

Under the rule of Franco, Spain’s military dictator from 1936 until 1975 Spanish women lived very restricted lives, controlled by their fathers, husbands, the Church and the State.

Available in paperback from most on-line bookstores and as an ebook from:
www.amazon.com 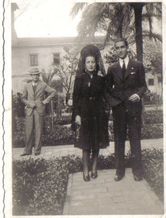 “Adele arrived one afternoon on her moped; she had finished work for the day and had managed to find me a couple of hours before she began to prepare the evening meal for her husband and two children.  She lived in a small hamlet called Los Nezas and worked as a cleaner in the houses of nearby residents, most of whom were foreigners, Danish or English.
‘My mother was born in Los Puertas, a small village about five kilometres from here,’ she began.
I knew the village she meant; it was a group of white painted houses that nestled on the side of a hill, sheltered from both the cold, north wind in winter and the heat of the afternoon sun in summer.
‘She had three sisters and a brother; quite a small family then.  My grandfather owned a bakery and every week he would go with his donkey to the nearby town, Almayate, to buy flour and my grandmother made the dough at night ready to cook first thing in the morning. They also had a small market garden and grew lots of produce:  beans, tomatoes, peas and peppers.  They sold bread and goats’ cheese, which my grandmother also made.  Some crops did not need watering, such as the beans and the peas, but it was my mother’s job to water the tomatoes and peppers and when she was very small she and her brother and sisters took it in turn to help with the noria, a waterwheel that pumped the water up into our well.  It was powered by the donkey, which walked round and round in a circle until the well was full.  One of the children had to sit there until there was enough water and then untie the donkey otherwise he would just keep on walking forever.  From a very young age my mother had to help with everything, in the huerta, the vegetable garden, in the house and in the bakery.
She and her sister began to work on the fincas, or local farms, when they were twelve years old and they were paid by the day. They worked during the harvests, picking tomatoes, olives, almonds, whatever was in season.  There were no invernaderos, greenhouses, then; everything was grown in its season.  The pickers went out in teams of four or five with one of them acting as the leader.  They worked in the fields all year round and in summer it was hard, hot work.  They worked de sol a sol, from sunrise to sunset and then they still had to help at home, working in the bakery or the house.  Even after she was married my mother continued working as a picker on the farms.
My mother and her brother and sisters went to the local school, where they had a very basic education but none of them stayed there very long; they were all needed to work.  The school is still there, you know, and has about twenty pupils,’ she added.  ‘And my grandmother’s house is still there, but I don’t know the people who live in it nowadays.  My grandmother came to live with us when she became old.  I remember her being very particular with her appearance; every morning she would wash herself thoroughly in a china bowl that stood in a big wooden stand that she had brought from her own house.  Then she would comb her hair, which was so long that she could sit on it, for hours before pinning it up on top of her head.  She told me that when my great-grandmother died she had to wear black for two years and stockings and a scarf all the time, even when working in the fields.  It was strange about the headscarf: it had a peak and the closer the dead person was to your family the longer the peak.  If your husband had died you wore the scarf with a very long peak but if it was a cousin you hardly needed to make any peak at all.  The other thing she told me was that during the period of luto, mourning, the door to your house had to remain closed; you were not allowed to have visitors.  To leave the door open was a lack of respect.  My grandmother died when I was sixteen. “

“Daughters of Spain” is a book that will appeal to most women but I recommend it to all those who choose to live in Spain and want to learn something of the history and culture in an enjoyable, easy read.”
Quote from “Lifetimes Magazine”

This book is compulsive reading. I found it hard to put down. Written with compassion and with true empathy with the subject. I would advise every female living in Spain to read this book. I will definitely read more books by this author. 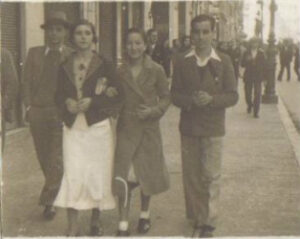 I first began to think about writing this book in the late 1980s, when I lived in Spain for a brief period.  I was impressed by the way the Spanish women I met had embraced the freedom of modern life in the short period since  the death of Spain’s dictator General Franco, in 1975.  I soon found it was a very different country to the one I had visited in the 1960s.

Because the interviews covered a period of immense social change in Spain’s recent history, I decided to link them together with short commentaries on topics such as divorce, abortion, contraception, domestic abuse and education, thus putting them into context.

The result is a mosaic of their lives, a vivid and unique picture of what life was really like for women in Spain over the past seventy years, of the hardships they endured and their aspirations for a more egalitarian future.

Daughters of Spain gives a gripping account of the hard won changes within society for the women of Spain, through the eyes and experiences of the women themselves.