Beth is a woman whose life is falling apart; there are problems with her marriage, her career is in the doldrums and her health is not good.

When she discovers her husband has been leading a double life she realises she has to get away from the cosy village life where everyone knows your business and spend some time alone.

She decides to do something she has never done before. She embarks on a pilgrimage to Santiago de Compostela.

As Beth walks the five hundred miles across the north of Spain she is tested both physically and emotionally.  She reaches the depths of despair and feels like giving up.

Then she meets other pilgrims—a soldier injured in Afghanistan, a woman who is looking for her lost son, a devout nun, a widower who thinks his life is over and many others—and each one has a tale to tell.

Everyone has a secret in their life.

When she arrives in Santiago de Compostela, five weeks later, she realises that the journey has changed her in a way she never expected.

Santiago Tales tells the story of a woman whose life is falling apart. She decides to get away from it all and embarks on a pilgrimage to Santiago de Compostela in Spain. The pilgrims she meets on her journey change her life.

Santiago Tales is a novel inspired by Chaucer’s ‘Canterbury Tales’. It tells the story of Beth, a woman who decides to run away from her problems by going on a pilgrimage to Santiago de Compostela. She walks 800 km across northern Spain and meets other pilgrims, each with a tale to tell. By the time she arrives at the end of the Camino, she realises her journey has changed her in unexpected ways.

Inspired by Chaucer’s ‘Canterbury Tales’ this novel tells the story of a woman whose life is falling apart. She decides to get away from it all and embarks on a pilgrimage to Santiago de Compostela in Spain. The pilgrims she meets on her journey change her life.

Available in paperback from most on-line bookstores and as an ebook from: 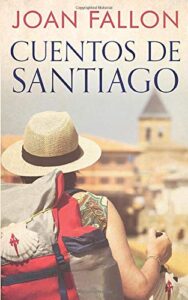 Also available in Spanish from Amazon, Barnes and Noble and Apple iBooks

50 year old Beth leaves behind her cellphone and escapes to Spain. For weeks she is incommunicado, having no contact with family or friends. It’s the way she wants it, needs it, while she thinks about her future. Bit by bit her reasons for going are revealed. On her own she sets out to walk the Camino de Santiago, but soon finds she is not alone as she meets others also on the trail.
The story is mainly Beth’s, but others’ stories are also told – Helen who has recently been reprieved from a life of restriction, Fran who has a big decision to make, and Maria whose reason for making the pilgrimage is heartbreaking. As we get to know them we learn to care about them. Even Lucky the dog – we wonder about her background and why she is making the long walk.
For me, this was an introduction to the Camino, and the idea certainly attracted me. Since it’s unlikely I’ll get to walk it myself, I was delighted to get to know it this way. I can picture parts of the terrain and feel I have walked along with Beth and her new-found friends.
As well as being a memorable story, the writing is of good quality and easy to read.

I thoroughly enjoyed Joan Fallon’s latest novel. The characters were well-drawn and believable, they drew the reader in with a variety of personal stories revealed over the length of the pilgrimage. The essence of the Camino was there – not just in the places and the difficult terrain, but in the way it changes people. It was very well conveyed – the length of the journey, the act of retracing other pilgrim’s footsteps, the generosity and bonding experienced between strangers along the way. It made me want to go back to northern Spain and walk the Camino myself!