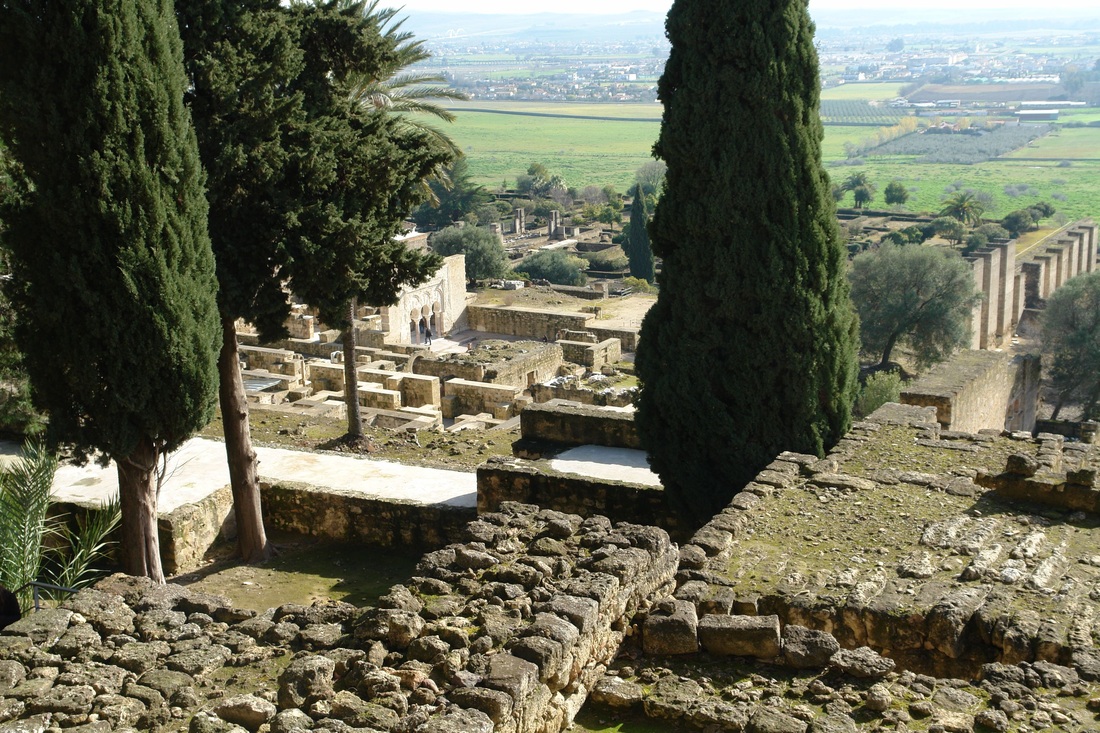 View from the upper terrace 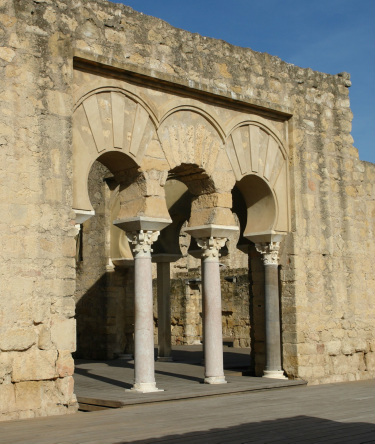 Entrance to the Royal Residence

When I first heard about the ruins of Madinat al-Zahra, I was intrigued by the idea that a palace-city of such magnificence should have lasted for such a short time.  Civilisations come and go, as any reader of history knows but for it to last no more than 75 years seemed a tragedy.  It was the summer of 2001. I picked up a leaflet about an exhibition that was to be held in the museum at Madinat al-Zahra, just outside Córdoba.  It was entitled The Splendour of the Cordovan Umayyads.  I remembered my childhood love of Tales of the Arabian Nights and I was hooked.  So we drove across from Málaga, on a blistering hot day to see what it was all about.

I have been back many times since and the place holds a fascination for me; so much so that it inspired me to write a novel.  I decided to tell the story of the city through a family that lived there; I had the bare bones of my novel before me, in the stone walls and paved paths, in the narrow passages ways, the ornate gardens, the artefacts in the museum.  All I needed to do was to make the city come alive through my characters.  I’ve called the novel The Shining City because ‘Madinat’ (or medina) is the word for town and ‘Zahra’ means shining or brilliant.  It’s said that the caliph called the city al-Zahra because, at the time it was being built, he was in love with a slave girl called Zahra.  It could be true; there are certainly written references to a concubine of that name but I think ‘Zahra’ referred to the magnificence of the city itself.  As the principle character in my book, Omar, tells his nephew:

‘It means shining, glistening, brilliant.  Possibly his concubine glittered and shone with all the jewels and beautiful silks he showered upon her but then so did the city.  It was indeed the Shining City.  When visitors entered through the Grand Portico, passing beneath its enormous, red and white arches, when they climbed the ramped streets that were paved with blocks of dark mountain stone, passing the lines of uniformed guards in their scarlet jackets and the richly robed civil servants that flanked their way, when they reached the royal residence and saw the golden inlay on the ceilings, the marble pillars, the richly woven rugs scattered across the floors and the brilliant silk tapestries, when they saw the moving tank of mercury in the great reception pavilion that caught the sunlight and dazzled all who beheld it, then they indeed knew that they were in the Shining City.’

Of course today, looking at the ruined paths, the piles of broken tiles, the reconstructed arches and pillars, we need to use our imagination to see it as it once was. 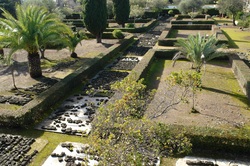 The palace gardens
The construction of the city of Madinat al-Zahra was begun in the year 939 AD by  Abd al-Rahman III and took forty years to complete.  Having declared himself the caliph of al-Andalus in 929 AD and with the country more or less at peace he wanted to follow in the tradition of previous caliphs and build himself a palace-city, grander than anything that had been built before.  The site he chose was eight kilometres to the west of Córdoba, in present day Andalusia and measured one and a half kilometres by almost a kilometre.  It was sheltered from the north winds by the mountains behind it and had an excellent vantage point from which to see who was approaching the city.  It was well supplied with water from an old Roman aqueduct and surrounded by rich farming land.  It had good roads to communicate with Córdoba and there was even a stone quarry close by.
The caliph left much of the responsibility for the construction of the city to his son al-Hakam, who continued work on it after his father’s death.  One of the most curious questions about Madinat al-Zahra is why, despite its importance as the capital of the Omeyyad dynasty in al-Andalus, this magnificent city endured no more than seventy-five years.  When al-Hakam died in 976 AD the city was thriving; all the most important people in the land lived there.  The army, the Mint, the law courts, the government and the caliph were there; the city boasted public baths, universities, libraries, workshops and ceremonial reception halls to receive the caliph’s visitors.  But al-Hakam’s heir was a boy of eleven-years old.  The new boy-caliph was too young to rule, so a regent was appointed, the Prime Minister, al-Mansor, an ambitious and ruthless man.  Gradually the Prime Minister moved the whole court, the mint, the army and all the administrative functions back to Córdoba, leaving the new caliph in Madinat al-Zahra, ruling over an empty shell.  Once the seat of power had been removed from Madinat al-Zahra, the city went into decline.  The wealthy citizens left, quickly followed by the artisans, builders, merchants and local businessmen.  Its beautiful buildings were looted and stripped of their treasures and the buildings were destroyed to provide materials for other uses.  Today you can find artefacts from the city in Málaga, Granada, and elsewhere.  Marble pillars that once graced the caliph’s palace now support the roofs of houses in Córdoba.  Ashlars that were part of the city’s walls have been used to build cow sheds 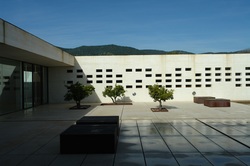 The museum at Madinat al-Zahra
Excavation of the site began in 1911 by Riocardo Velázquez Bosco, the curator of the mosque in Córdoba.  The work was slow and hampered by the fact that the ruins were on private property.  Landowners were not keen to co-operate and eventually the State had to purchase the land before the excavations could begin.  The work progressed slowly but gradually over the years a number of government acts were passed which resulted in the site being designated as an Asset of Cultural Interest and in 1998 a Special Protection Plan was drawn up to give full weight to the importance of the ruins.  Today the site is open to the public and has an excellent visitor centre and museum. 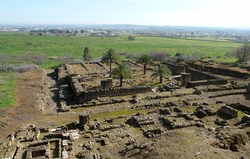 The mosque was the first building to be completed, in 941 AD.  It was also the one which suffered the most pillaging. Until the 1960s, when the walls were rebuilt, only the foundations had survived.  The mosque was positioned so that all the inhabitants of the city had easy access to it.  Here is an extract from ‘The Shining City’ where, Qasim, the potter visits the mosque:

The sound of the muezzin rang out across the city.  Today he would go to the mosque to pray.  He grabbed his cap and throwing his djubba around his shoulders he hurried out.
He joined the queue of people heading for the mosque; there was a greater number than usual at this hour, probably because the news was spreading about the soldiers leaving.  The busiest time was normally at evening prayers which he sometimes attended although he usually only went on Fridays.  The mosque gardens were crowded with people cleansing themselves before entering the mosque.  He waited until there was a space at the fountains then washed himself down in the cold water, removed his shoes and went inside.  He found a space near the front, facing the mihrab and knelt down on one of the straw mats that covered the dirt floor.
The mosque had been the first building to be completed in the city; it lay outside the alcázar but adjacent to its walls so that everyone, the local people who lived in the medina and the residents of the alcázar, could use it.  It was a beautiful building, its craftmanship the equal of the mosque in Córdoba.
Qasim had barely closed his eyes and touched his forehead to the ground when there was a slight disturbance which caused him to look up from his meditation.  It was the Khalifa.  He had entered through a covered passageway which led from the gardens of the alcázar straight into the mosque and now he took up his usual place in the maqsura.  He was a devout man who took his role as Defender of God’s Faith seriously.  His son al-Hakim was also present today, praying for the success of his troops.  Qasim had read the notice plastered on the wall of the mosque informing all the citizens that their borders were under threat.  Today they would include in their prayers an exortation to Allah to bring them victory.
No sooner had the Khalifa taken his position than the imam began to lead the congregation in prayer:
‘In the name of Allah, the Merciful, the Compassionate…’
The prayer room was dark, its oil lamps unlit, the only light creeping through the openings in the ceiling high above.  Yet from somewhere a light infused the horseshoe arch of the mihrab with a warm glow.  The holy words of the Quran had been inscribed on this beautiful facade.  Men had created a masterpiece of coloured mosiacs on a background of pure gold.  Looking at it Qasim was reminded that he too was a craftsman, that all that he made with his hands was for the glory of Allah not for man, not for wealth and riches, not for fame, not for power.  How could he have forgotten that?  He, who loved God so.  He had sent his son into temptation, telling him to sell their pottery to the Khalifa.  Why had he not been content with the life he had in Córdoba?  Why had he strived for more?  Why had he coveted a new house and fancy possessions?  What use were they to him now that he had lost his most treasured possession, his son?

The novel, ‘The Shining City’ is to be published next month.