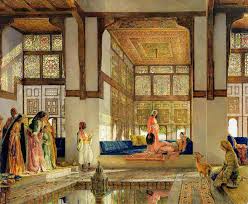 In the year 950 AD or thereabouts, a young girl was captured by slavers. She was born in the north of Spain, probably in the Kingdom of Navarra. She was blonde, blue-eyed and beautiful and I’m sure the slavers thought they would get a very good price for her from the Moorish inhabitants of al-Andalus (what is now Andalusia in southern Spain).

Slavery was common in Moorish Spain in the 10th century. Muslims were allowed to own slaves as long as they were not Muslim, nor People of the Book (that’s to say, Jews or Christians). Many slaves came from northern Spain or were bought from the Viking traders. Naturally, blonde women were very popular in a part of the country where most of the population was made up of Arabs, Berbers and Muwallads.

The girl was bought by an educated family in Córdoba and named Subh. While she worked for them, she learnt to read and write in Arabic and to appreciate poetry. It’s not certain why she didn’t continue to live with the family, but it was common at the time for people to educate their slaves and thereby increase their value.  The slaves could then be sold as book keepers or letter writers, for example. Owning a slave was a sign of prestige and especially if that slave was educated or had a white skin. Whatever the reason the next  time we read of the girl, she is living in the caliph’s harem.

The Omayyad caliph, al-Hakim II, was a homosexual and had no interest in the women in his harem. Homosexuality was common amongst the upper classes in al-Andalus society, and although it was forbidden by the Koran, it was widely tolerated. But the ruler of the country had to produce an heir. His mother, the Queen Mother, the most powerful woman in the country, decided to do something about this. To keep her own position secure she needed her son to produce an heir. She instructed the chief eunuch, who ran the harem, to chose a special kind of concubine for her son, someone interested in poetry and music, in literature and all the things that occupied al-Hakim’s mind. She wanted someone with whom he could converse on an equal footing.
The chief eunuch chose Subh, who was tall and slim, very intelligent and by now, well educated, and he groomed her to seduce the reluctant caliph. The Queen Mother instructed Subh to cut off her hair and dress in men’s clothing when she went to see the caliph. Even though she was obviously not a man, the caliph eventually took her to his bed and a son was born. She was known from then on as Subh umm Walad (Subh, mother of a son). The caliph and Subh were said to become good friends and although he had already done his duty, another son was born a couple of years later.

The older son died when he was only 8 years-old and the younger one, al-Hisham, became the heir to the throne. In 976 AD, al-Hakim II died of apoplexy – what we would probably refer to today as a stroke – when he was only 50 years old. His young heir was just 11 years-old. And Subh umm Walad was now the new Queen Mother, the most important woman in the country.

How was such a young child going to rule a wealthy, complex country like al-Andalus, especially as it was surrounded by enemies? The new Queen Mother decided that a Regency should be formed to rule until her son was old enough to take control. She called together the Grand Vizier, General Ghalib and her lover, Abu Amir. They were all men she could trust – or so she thought – to protect her son. However this gap in the continuity of the rule of the caliphs meant things began to change.  She didn’t realise it but the eventual disintegration of the powerful Omayyad dynasty had begun. 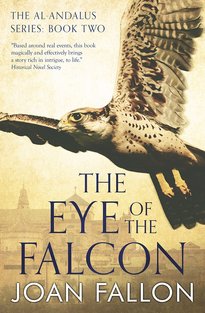 You can read the fascinating story of Subh and what happened to the young caliph in Book 2 of the al-Andalus series, The Eye of the Falcon.

​and other bookstores
Watch out for book 3 in this exciting series, due to be published in the summer.