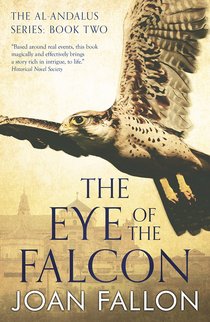 This is a short extract from Book 2 in the al-Andalus series of historical novels,
​ THE EYE OF THE FALCON

Subh padded across the cool marble floor, the bells on her anklets tinkling as she walked. It was barely an hour since her lover had left yet already she missed him. As usual he had left her with a churning cauldron of emotions, from the satisfaction of a night spent in his arms to the despair of being parted from him, from the confidence that he was doing everything he could to ensure her son retained his rightful hold on the throne to a growing doubt about his motives. His antagonism towards al-Jundi worried her. On the face of it his anger was understandable but to dismiss the Khalifa’s most loyal and trusted servant would leave Hisham vulnerable. Subh did not want anything to happen to her son because, without him, she would return to obscurity, just another slave girl who had risen to the highest position she could only for it all to come to nothing.
‘Your bath is ready, Sayyida,’ Afra said, sprinkling some lavender oil in the hot water. ‘Would you like me to massage your shoulders first? You look rather tense.’
‘Yes, that would be lovely.’
She took off her robe and lay face down on the table. Afra was a good masseuse; her hands were strong but she was also gentle. She sighed as the slave began to rub her back and shoulders with oil smelling of sandalwood. ‘That’s a pleasant smell,’ she murmured. Already she was feeling sleepy.
‘It’s a mixture of frankincense, sandalwood and geranium. It’s to help release any tension,’ her slave said.
‘Well, it’s working,’ she said, a little sleepily as she let her thoughts drift back to before, to her early days in the harem.
**
After that first night, al-Hakim sent for her again, and the night after that, and the next one too. The women in the harem were astonished and badgered her with questions about what had happened.
‘What is he like?’
‘Is he handsome?’
‘Did you dance for him?’
‘Did you make love?’
‘You are so lucky, nobody has ever been invited to see the prince a second time.’
Some of the comments, such as, ‘What does he see in a bean pole like you?’ were hardly flattering, but she didn’t mind; her plan was working.
‘You have bewitched him,’ Zahr said. ‘It’s wonderful. At last someone has managed to get his attention. Now you just have to get him into your bed.’
She looked at her out of the corner of her eye and whispered, ‘Or have you managed that already?’
Subh laughed. ‘No, not yet. You have to move carefully in these matters,’ she said, as though she had been seducing princes all her life.
The general atmosphere in the harem was jubilant. Although some of the women were jealous of her success, they were also happy for her. It reflected well on all of them that the prince was taking an interest in one of the concubines and, more importantly, it had put Yamut and the Royal Wife in good spirits.
‘I have never seen Yamut smile so much,’ said Zahr. ‘He is as proud of you as if you were his own daughter.’
‘There is still a long way to go,’ Subh said. ‘But it is astonishing how kindly the prince treats me. Look, he had this book of poems sent to me this morning. It is from Damascus.’
She showed Zahr a beautifully illustrated book, covered in Arabic script.
‘Can you read that?’ Zahr asked in surprise.
‘Yes, of course. I told you that my mistress taught me to read.’
‘I know, but I didn’t realise that you were clever enough to read real books.’
It was only now that Subh truly understood what her mistress had been trying to do for her; she had given her a gift, the gift of an education that in her circumstances she would never have had, and by doing so, she had opened many doors for her. Subh doubted that her mistress had intended that she would end up in a royal harem, trying to seduce a homosexual prince, but she would have been well aware that an education could serve her maid in many ways.