Welcome to JG Harlond, author of the best selling historical novel series THE CHOSEN MAN. Today she tells us about Book Two, A TURNING WIND, and the historical background to it. It’s set in 1640 in the royal courts of Spain and France.

King Felipe IV of Spain painted by Velasquez
Felipe IV of Spain, nicknamed el Rey Planeta by his contemporaries, presided over a court that was both pious and secretly decadent. A ‘lazy king’, he was said to have ignored the good government of his country by relying too heavily on his valido, the infamous Conde-Duque de Olivares, and devoting his time to collecting Old Masters, being painted himself by Velázquez, hunting, theatre-going and womanising. Felipe also presided over the beginning of the decline of the Spanish empire, and watched his children die until there was but one in-bred drooling son to follow him. Felipe himself was the son of Felipe III of Spain and Margarita Teresa of Austria, and already the product of Habsburg endogamy before he married a wife with Habsburg blood, and then when she died, his niece. ​

Queen Isabel de Borbon painted by Velasquez
Felipe’s first wife was Elisabeth of France, daughter of Henry IV and the odious Marie de Medici, and sister of Henrietta Maria, who at the time of my new novel, A Turning Wind, was Queen of England. Elisabeth, or Isabel as she came to be known, despaired of her husband’s over reliance on the dubious Conde-Duque de Olivares and constantly urged him to take charge of his country and its affairs as a good king should. After years of nagging and getting nowhere, Elisabeth resorted to conspiring with other Spanish nobles to remove Olivares as Chief Minister altogether. The Queen, who was renowned for her beauty, intelligence and ‘noble’ character, was very popular with the Spanish people, but this may have had a lot to do with the fact that she openly opposed the much hated valido. Eventually, by allying herself with Olivares’ nephew and successor, Luis de Haro, Elisabeth succeeded in ousting Olivares and for a brief period Elisabeth held considerable influence over Felipe and his empire. This is the background to my new novel, A Turning Wind, the second story in The Chosen Man trilogy. ​ 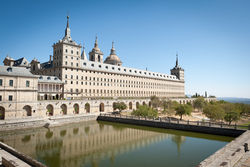 El Escorial
A great deal has been written about what was going on in both Spain and England during this period, which is the run up to the English Civil War. What is less well known is that Spanish and English ambassadors were drawing up a treaty to allow Spanish tercios (fighting to recover the Spanish Netherlands) to use southern England as a land bridge to Flanders. This was needed because French ships were constantly sinking Spanish troop vessels in the English Channel despite the Queen of Spain being French, and the Queen of France being Spanish. Basically, all of Europe was at each other’s throats in the early seventeenth century – but Felipe IV of Spain tried not to let it worry him too much. Like the King of England, who was trying to ignore an elected Parliament and gathering internecine war clouds, Felipe focused on hunting and art. Collecting Old Masters was seen as an important part of a monarch’s reign for it showed their power and good taste.
The background reading and research for A Turning Wind took a long time because before writing a story involving the Queen of England and the Queen of Spain I needed to sort out who was where and why, before I could even get down to who was doing what between 1639 and 1641. But it was fascinating; and having access to Henrietta Maria’s letters to her husband made it that much more personal, although that part comes into the next book By Force of Circumstance, out later this year.
In A Turning Wind, the wily merchant-rogue Ludo da Portovenere is taking secret messages from the British monarchs to Madrid. Here is a scene set in El Escorial, which I knew pretty well having lived nearby for many years. ​ 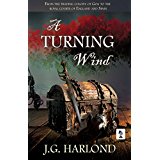 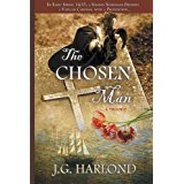 The Chosen Man and A Turning Wind are available from book stores and on-line retailers. Her is the Amazon UK link for books by J.G. Harlond.
You can find out more about the author on: www.JGHarlond.com
Or visit her blog ‘Reading and Writing’: