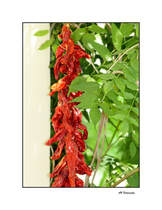 ​We’ve all heard of the Mediterranean Diet, but what exactly is it and what has it got to do with Moorish Spain? In a society concerned with increasing obesity in people of all ages, and the subsequent health issues that follow, more and more attention has turned to the need for improving our life styles, particularly our diet. Probably one of the most popular, and certainly the easiest of the numerous diets on offer, is the Mediterranean Diet, so called because it is the traditional combination of foodstuffs that the people living in Mediterranean countries have followed for centuries. But how many people today realise that this healthy and wholesome way of eating owes a lot to Moorish influence in the Middle Ages?
This recommended diet consists of a great number of fruits, vegetables, nuts, seeds and pulses, together with fresh fish and seafood, all items that we can see on the supermarket shelves today no matter where we live. But did you know that much of this diet we owe to the Muslims who occupied Spain from the 8th until 15th centuries. The Christians may have expelled the last of the Moors in 1492 but they didn’t get rid of the legacy that they left in terms of cuisine, which has over the centuries spread across all of Europe. 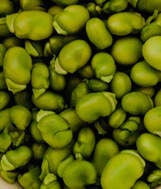 Many vegetables and fruits that we now consider to be native to Spain were in fact introduced by the Moors, most of which they in turn brought from India, Africa, Persia and the Spice Islands. The climate of the Mediterranean was perfect for growing these crops, and masters of irrigation that they were, the Moors soon cultivated the land and planted large areas of wheat and rice. They also grew spinach, eggplants, artichokes, chard, radishes, celery, carrots and even asparagus, which up until then had been discarded as a weed.
The Moors introduced sugar to Europe for the first time by bringing sugarcane from the Nile valley. It grew particularly well along the Mediterranean coast and especially in the Málaga area  of al-Andalus. Such was the liking for sweet foods that it became very popular in cakes, for making candied fruit and to sweeten fruit drinks, to preserve whole fruits and to make jams. One of the desserts that was as much in favour then as it is today, was churros, made from a doughnut type batter and deep-fried in oil, although in those days they preferred to cook it in boiling honey. 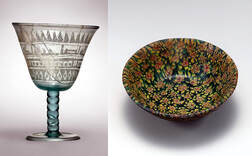 ​10th century Baghdad was the culinary centre of the age, where foods from Syria, Persia, India and Central Asia mingled. Much as today, food became not just a necessity, but a fashion which was  soon picked up by the elite Muslim families. Oddly enough it was one man in particular who shaped our current way of eating. His name was Abu al-Hasan and he was born in Baghdad in 789 AD. He was a court musician and became known as Ziryab (the Blackbird) because of the beautiful music he both played and sang. But Ziryab wasn’t just a musician, he was the man who brought new ideas about fashion and food to al-Andalus. When he was in his early thirties he arrived in al-Andalus and presented himself at the court of Abd al-Rahman II. From then on, things changed. Up until his arrival in Spain, eating was a very basic affair. Ziryab introduced a degree of sophistication into mealtimes. Tables were fitted with tooled leather coverings instead of being bare wood; there was a range of cutlery to use and crystal glasses. Instead of piling all the food onto a single plate, regardless of what it was, he suggested it should be served in a number of separate courses: soup to start, followed by fish or meat with vegetables, then cheese and fruit or nuts, just as we know it today. His ideas spread first from the royal courts to the nobility and then down to the common folk, then they spread out across Europe. In Córdoba they still prepare a dish called ziriabí made of roasted and salted broad beans, which is called after him. Another dish that he was known for, is Taqliyat Ziryab, made of meatballs and small pieces of dough fried in coriander oil. And in Zaragoza they still serve a dish of walnuts and honey that he made popular. 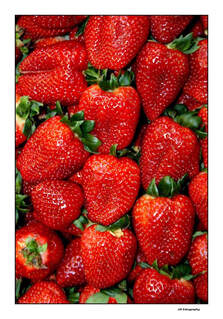 ​For the Moors, vegetables were important ingredients in any meal and were cooked just as we do today as part of the dish, rather than eaten raw or served as an accompaniment. Pulses, very high on the list of foods in the Mediterranean diet, were cooked in great quantities and added to spicy stews. Chickpeas, lentils and beans were a great source of protein and were more readily available and of course, cheaper than meat.
With the mild Mediterranean climate to help them, the Moors cultivated cherries, apples, pomegranates, bananas, figs, grapes, lemons and oranges. They used the grapes to make wine, vinegar to flavour their food, and dried them as raisins to add to their cooking. They also produced olive oil for cooking.
Flavouring was important to the Moors and they introduced many spices and herbs into al-Andalus: cinnamon, cardamon, coriander, cumin, mint, ginger, saffron, pepper, nutmeg and many others, all originating from India and Persia.
Nuts are also considered an important part of the Mediterranean diet and almonds and hazel nuts were often used in Moorish cuisine. Almonds, in particular grew in great abundance in al-Andalus and were used to make sweet pastries and marzipan, or ground into a smooth cream to make ajo blanco and Salmorejo.  Both of these savoury soups we still enjoy today. The Moors also made a paste called almori from salt, honey, raisins, pine nuts, almonds, hazel nuts and flour, which they pounded together, moulded into a flat piece and then left to harden. They would break off a piece of this hard paste, soak it in water until it had softened and then add it to whichever dish they were cooking. Instant goodness and more healthy than our modern stock cubes.
Durum wheat, which is harder than other wheat and contains less moisture, is ideal for making various types of pasta because it can be rolled and shaped more easily. It was brought from central Asia by the Muslims and introduced into Sicily and al-Andalus as early as the 9th century and has the pasta it produced has featured in recipe books dating back to the 13th century.
According to the owner of one well-known restaurant in Córdoba, the preparation of sweet and sour stuffed dishes stretches back to Moorish Spain, as does the practice of adding dried fruit and nuts to meat dishes. He proudly admits that his chef still prepares traditional al-Andalus recipes that date back eight hundred years or more.


If you are interested you can read more about these Andalusian recipes online at http://italophiles.com/andalusian_cookbook.pdf

Here is a short extract from one of my historical novels,  The Shining City, where they are preparing the evening meal for the Festival of Eid:
Evening was drawing in and the pale sun was hanging low in the sky.  Soon it would sink below the horizon leaving the sky an inky black.  They had built a bonfire outside in the street, alongside those of their neighbours.  Everyone was turning out now, the women carrying the food in earthenware containers, the men stoking the fires and tending to the meat.  Some were roasting whole animals over the charcoal, others had chopped their goat into pieces and were cooking it slowly in the embers of the fire.  The air was rich with the smells of cardamon, cinnamon and paprika.  Fatima had been all day preparing the goat that he and Ibrahim had slaughtered earlier.  It was a good animal, young and tender.  He had butchered it into pieces and his wife had marinated it with salt, pepper, dried coriander, cumin, saffron and oil.  He had bought the finest saffron specially for the feast.  Fatima had put the meat into their largest earthenware pot with layers of aubergine, chopped almonds, meat balls and lavender.  Now it would simmer on the fire until it was done and then she would thicken it with whipped eggs and crown it with egg yolks.  Qasim’s mouth watered as he thought about it.  It was a recipe Fatima’s mother had made every Eid.  Now Fatima did it for her family.