My book for today is INTO SUEZ  by the Welsh novelist, Stevie Davies, whose books have often cropped up on the short list but never claimed a prize. 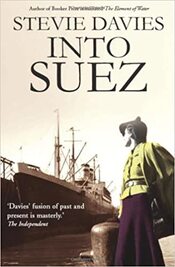 1949: Egypt’s struggle against its British occupiers moves towards crisis; Israel declares its statehood, driving out the Arabs; Joe Roberts, an RAF sergeant, his wife Ailsa and daughter, Nia, leave Wales for Egypt. “Into Suez” is a compelling human and political drama, set in the postwar period when Britain, the bankrupt victor of the Second World War, attempted to assert itself as an Imperial power in a world wholly altered. The novel is set in the run-up to the Suez Crisis, a template for future invasions (Iraq and Afghanistan being the most recent). In this moving story, Joe’s tragedy is that of an ordinary working man of his generation: he’s a lovely, humorous, emotional man in whom the common ration of racism and misogyny becomes a painful sickness. Ailsa, intelligent, curious and craving to explore the realities of the Egypt she enters, meets on the voyage out Mona, a Palestinian woman who excites in her yearning for a world beyond her horizons. When Joe’s closest friend is murdered by Egyptian terrorists, their relationship spirals towards tragedy. Through it all, love remains. Looking back in old age, their daughter Nia follows in their wake to sail the Suez Canal with the aged Mona. Nia has been told her father was a war hero: now she will face a more painful truth.
REVIEW FROM THE GUARDIAN

In Davies’s story, Ailsa is an intelligent, self-sufficient young woman from the Welsh valleys who, accompanied by her young daughter Nia, sails out in 1947 to join her husband who is serving in the RAF at Ismalia in the Western Desert. Life in the world’s largest military installation has some compensations, such as unrationed cherries in the company store. But the salt marshes of Suez are pitilessly inhospitable – “a lunar landscape as flat as Suffolk and sterile as death” – which leaves Ailsa to wonder “how many Arab labourers died to dig this . . . ditch the Roberts family was arriving to defend as somehow British as the Manchester ship canal”?
Wives of the rank and file are expected to keep their heads down and confine themselves to quarters. Yet Ailsa is spellbound by a sophisticated, dark-skinned concert pianist named Mona with whom she forms an attachment on the boat. Mona’s husband is an Israeli army psychologist, which leads Ailsa to assume Mona must be Jewish; yet it transpires that she is an exiled Palestinian Arab.
Also on the voyage is a young German refugee travelling to be reunited with her British husband and a querulous Welsh woman whose hostility towards anything foreign encapsulates the narrow, British fear of displacement. It’s a cast of characters whose nationalities and circumstances are as confused and combustible as Suez itself; and though the story culminates in a distressingly well-executed denouement, Davies’s main theme is what occurs when protocols are breached and privates’ wives drawn into unguarded intimacy with the officer class. “What was Ailsa guilty of? Just getting out of line. Being, not even a black sheep, but a piebald sort of sheep in a field of whitish fleeces.”
As the daughter of an RAF officer herself, Davies has firsthand experience of being shunted round the remnants of empire: “The war had beggared and bankrupted Britain. We’d scuttled out of India and Palestine and we’d have to scuttle out of the rest of the Middle East. Scuttling was all we were good for.” Davies first dealt with the traumas of being a bullied army child in 2001’s The Element of Water; and her picture of the cruel indifference and blind prejudice of the British occupation of Egypt seems to have been further honed by her understanding of the average British forces boarding school.
Davies frames the historical action with the contemporary account of Nia, who travels back to Egypt to meet her mother’s friend Mona, still a celebrated and charismatic concert pianist in her old age. Nia’s recollection of the 1950s is fragmentary, but formed of vivid impressions such as the sight of “stricken animals bleeding in the water”. In one of the novel’s most memorable scenes, we discover how bored British troops sailing to Suez used porpoises as target practice. “Ordered to do so, someone said. Uproar. Barbarians! Oh God, porpoises are only fish. Get a grip. Don’t you eat fish and chips then?”
It has to be pointed out to them that the creatures are warm-blooded mammals, like ourselves. But the incident serves as an example of Davies’s remarkable ability to encapsulate imperial wrong-headedness in a single, indelibly recorded incident: cynical, gratuitous – neither sense nor purpose.