Guest interview with David Penny
Good morning David. Thank you for being the guest on my blog this month. I see you are writing as prolifically as ever, so it’s good of you to take time out of your busy schedule to talk to me.
Question 1
My first question has to be, how have you coped during what can only be described as a turbulent year? Has your writing suffered from the Covid restrictions? Or has so much time at home helped you?

Someone asked me a very similar question the other day, and my reply was the same as I’m going to give to you. Apart from wearing a face-mask and having a few months of Ocado deliveries, my life has been pretty much the same as usual. I sit in my office and write most of the day. I think I’ve probably been no more or no less productive, bearing in mind, as you know Joan, I am ridiculously Schedule drive with spreadsheets telling me when my current, next and the next again book will be started and finished.
The big change has not being able to meet up with our kids or family, and not being able to get out to our house in Spain.

Question 2
I know that you’ve been writing for some years now. Has it always been in the same genre?

I started writing at 9, and was published at the age of 23. At that time I wrote exclusively in the science-fiction genre. I had 4 novels published by Robert Hale between 1974-79, together with short stories in Galaxy and Vertex, and then I stopped writing. Not all at once, but gradually, until it was no longer something I did. But I never forgot I wanted to be a writer.

Sometime around 2010 I was approaching if not retirement then something one the edge of it. I realised I had forsaken by dream of writing, so began to do it again. However, I no longer read much science-fiction so started to write what I read, which was mainly Mystery books.

I probably started and abandoned a dozen works until I fell on the idea of Thomas Berrington. Recently I have branched out into a completely new genre of Paranormal Spy Thrillers with a new series. I also have several other projects on the back-burner waiting for the time to get to them.

Question 3
You are best known for the Thomas Berrington series of historical novels set in medieval Spain. What inspired you to use Moorish Spain as your location?

That’s a great question to which I don’t really have any rational answer. I do know some time around 2011 or 12 all the family were sitting around the living room watching the TV. I can’t rermember what was on but it certainly had nothing to do with Moorish Spain. But I said, “I wonder if anyone’s ever written a murder mystery set in Moorish Spain?”
That was it.
I thought it such a mesmeric period of history somebody must have done so. A month later I had found nothing. So, I decided, that would be my job to write that book. And it would be a series. One book a year from 1482 to 1492. I almost made it, but there wasn’t enough history or battles, so the series ended up as 9 books only. It also makes the box sets easier with only three titles in each. 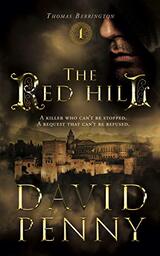 Question 4
Your hero is an interesting man, an Englishman and a surgeon, who finds himself working in a Moorish palace. Can you tell us a little about him. Was he inspired by anyone you know?

I’m afraid not, and if there was someone like Thomas Berrington out there I’m not sure I’d want to meet him. He is an honourable man, but trouble keeps finding him. Thank goodness, or the books would prove very dull.
Thomas came about as a construct from the research I carried out. I’m not an historian so had nothing to start with. I had to look everything up. I also had to find the material as well, because Moorish Spain is very poorly documented. It some way this makes my job harder, but it also makes it easier because there is less I can be taken to task over if I get it wrong.
He became a surgeon after I read of the great Moorish and Islamic physicians and scientists.
He was English because I thought it would be interesting to have him cast adrift in an alien culture.
And strangely, from his very first inception, his name was going to be Thomas Berrington. It could not have been anything else.

Question 5
On a more personal note, you and your wife have a holiday home in Spain now. Has being able to stay in Spain for a prolonged period of time helped with your writing?

Before writing the first book Meg and myself flew out to Spain to get a feel for the country. It was my first time setting foot there since I was sixteen-years-old and went on a school trip that included a visit to the Alhambra. I have a very vague recollection of the palace, but remember better the fact we could get served beers in the bars of Granada.
After several field trips we were attending the A Place in the Sun exhibition in Birmingham and I persuaded Meg to do a screen test alongside me for the show. Neither of us expected to be chosen but one Monday the phone rang and someone asked if we were still interested in appearing. I said yes. They said can you fly to Malaga next Sunday?
We purchased the second house we were shown. If they had not taken us there – and they had not intended to but something else fell through – we would not have bought anything. Fate, perhaps.
Being there, on the ground, is invaluable. The first ever time we flew out to what was our house we were sitting on a bank looking across the great bowl of the valley where our house sits and Meg said, “Do you know, we can hear every word those olive pickers are saying.” They were at least half a mile away. That went into one of the scenes in one of the books. Nothing can beat actually being there and seeing, hearing and smelling the land.

Question 6
You’ve written nine novels in the series. Are there any more to come or is Thomas Berrington going to retire now?

The ninth book closes the Spanish cycle of the series, but Thomas, Jorge and the others are returning to England for what will be a relaunch as a Tudor Mystery series when Catherine of Aragon comes to England to marry Prince Arthur. How many of the Thomas Berrington Lemster Mysteries there will be I don’t know. As many as I can conjure up plots for, I think.
Eventually I will take pity on Thomas and allow him to return to his beloved Granada. When that happens his son, Will, will continue the family tradition as Henry VIII comes to the throne and marries Catherine.

Question 7
Historical fiction seems to have been your passion for the last few years, but you’ve been writing something quite different lately. Tell us about your new book, Unit -13, An Imperfect Future.

An Imperfect Future is the culmination of a book I started and abandoned 14 years ago. That too was an idea that came perfectly formed. What if a man could see into the future, but only by ten seconds. What might be made of that?
I started the book then abandoned it. After finishing Book 9 of Thomas I needed a break and pulled it out of the drawer. This time I finished it, and there will be at least six more in the Unit-13 series. The book pulls together my interest in history, but also elements of the paranormal and spy thrillers, so melding several of the strands I used to write about.

​
Thank you David, the best of luck with your writing. If you want to find out more about David Penny and his work go to his Website, or check him out on Facebook and Twitter. Or, better still, sign up to his Newsletter.