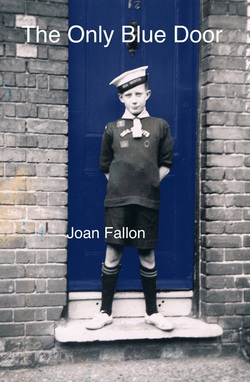 I began to write THE ONLY BLUE DOOR about two years ago, after reading an article in a magazine about children who were sent to Australia by the British government as child migrants.  Many of these children were told that their parents were dead and were either placed with foster families or put into orphanages.  It wasn’t revealed until 1986, when a Nottingham social worker called Margaret Humphreys was investigating the case of one of these children, then a grown woman, that many of the children were not orphans, they had families alive and well in England.   She set about tracing more families and eventually revealed the truth of what had taken place.  (You can read her story in her book Empty Cradles.)

I felt inspired by what she had done to write a novel based on the events of that time.   The protagonists are three young children who, through a series of events, are wrongly labelled as orphans and sent to Australia.  The novel follows their stories, their heartbreak and separation, their resilience and above all their belief that one day they will find their mother and return home.

After over a year of sending my manuscript out to every publisher and agent imaginable, I have at last decided to self-publish this latest novel.  It wasn’t that it was badly received by them, in fact there was quite a lot of interest in the book but, in the end, no-one wanted to take a chance on it .  One publisher was convinced it would make an excellent Young Adult book and persuaded me to make some substantial changes to suit a younger readership.  In the end her colleagues considered that, even after my adjustments, it was  still too adult for their readers so I had to revert to the original format.  I did more editing and more changes until at last I had it as I wanted.

I have done a lot of research into the topic of child migrants, something that still pops up in the news from time to time, and have tried to be faithful to the facts even though this is a work of fiction.  Looking back, from the perspective of life today, it is hard to believe that children were taken from their homes and families and sent half-way across the world.  To us it seems callous and unfeeling but I do not doubt that many people involved truly believed that they were doing the best for the children at the time.  There was also a political agenda then, in that Australia was desperate for immigrants and welcomed these children with open arms and not too much soul-searching.

Despite the serious theme of the book, I have endeavoured to make it an enjoyable story about three children who face a new life with resilience and courage.  My biggest problem with the novel was how to give it a positive/happy ending while still staying true to the story.  You will have to read it yourself to judge whether I have managed to achieve this.

It is available in a variety of ebook formats through Smashwords and Kindle and is due to be printed in paperback within a week or so.