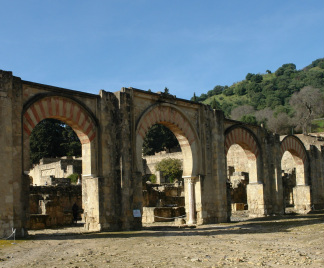 I loved researching the history behind my latest novel THE SHINING CITY.  Besides reading a lot about the period, I made many trips to the archaeological site of Madinat al Zahra, just outside Cordoba.  The ruins of this ancient city lie in the lee of the Sierra Morena mountains and face across the wide plain of the Guadalquivir valley.

They began the excavations in 1911 and up until now they have only excavated one tenth of the inner part of the city – and then there is still the part outside the city walls.  As few contemporary written records remain one can only wonder at the size of Abd al Rahman III’s new city.

Below you can read the prologue to my new book, which is set in the city in the early years of its construction.  The year is 987 AD and Omar, one of the main protagonists is thinking back to when he first visited Madinat al Zahra, forty years earlier. 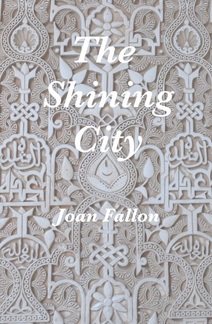 The old man sat in the shade of the mosque wall.  It was still early but already the heat was building with its usual summer ferocity.  He loosened his robe slightly and fanned himself with the napkin he had in his hand.  Omar was not a rich man but neither was he poor.  His djubba was made of the finest white cotton, with long narrow sleeves and over that he wore his djellaba, a hooded cloak of the same material.  It was light, cool and comfortable.  He was of the generation for whom appearances mattered.  Even his cap, crocheted in a green and white design, sat elegantly on his long, white hair.  His beard was trimmed and shaped; once it would have been touched with henna but now it was as white as his hair.

‘More tea, old man?’ the waiter called from the entrance to his tiny shop.

Omar waved him away, irritated that he did not automatically come over and refill his cup.  That was so typical.  Standards were slipping all the time.  He took off his cap and scratched his head.

‘There you are, uncle.  We’ve been looking for you everywhere.’

It was his nephew, Musa, the youngest son of his brother Ibrahim.  He was with his friend, Ahmad.  Omar looked at them and smiled.  Lanky youths, with their hair cut short in the latest fashion, they behaved as though life was theirs for the taking.  If only they knew what vicissitudes lay ahead of them.  Not that they would pay any heed.  He certainly hadn’t at their age.  The boys sat down beside him. The two were never apart; it was as if they were joined by some invisible rope.  Where one went, so did the other.  They reminded him of his own childhood; he had had a close friend named Yusuf.  Just like these boys they had done everything together and were so similar in looks and mannerisms that they were often mistaken for brothers.

The boys nodded and Omar waved across to the waiter, who still lounged in the doorway.

‘Another pot of tea and two more glasses, please,’ he said.

He turned to his nephew and asked, ‘So child, you have been looking for me.  What is it that you want?’

He already knew the answer: nothing, just the opportunity to drink mint tea and listen to Omar’s stories.

‘We wanted to see if you were all right.’

The boys looked at each other and giggled.

‘Is it true that you are more than a hundred?’ Ahmad asked.

‘No, it’s not true, although I certainly feel like it some days.  Now what is it you want to know?’

‘Have you ever been inside the Khalifa’s harem?’ Musa blurted out.

The waiter arrived and set the freshly brewed mint tea on the table.

‘Maybe something sweet for the boys to eat,’ Omar said, looking at the waiter.

Omar turned back to his eager audience.

‘So, what were you saying?’

The old man smiled; for a moment he let his thoughts drift back to when he was young.  He sighed and turned back to the boys.

‘Yes uncle,’ his nephew said, barely keeping the impatience from his voice.

‘You do realise that no man is permitted to enter the Khalifa’s harem, other than the Khalifa himself.  It is an offence punishable by death.’

‘Very well, as long as you do not tell anyone that I was once there, I will tell you about the most beautiful harem in the world.’

He paused and looked at the boys; their eyes were as round as moons.

‘Now, in the year 947, when I was not much older than you, my father took me with him to work in the new city, Madinat al-Zahra.’

The boys looked at each other and smiled.  Omar’s stories always began in that way.

‘Our ruler, Abd al-Rahman III, wanted to build a city-palace worthy of the title of Khalifa so he sent his engineers and architects out to find the perfect location.  And they did.  They found a spot in the foothills of the Sierra Moreno, green, fertile, sheltered from the north winds, with as much water as you could wish for, yet set high enough above the plain so that you would be able to see anyone approaching.  From there you could see across the valley of the Guadalquivir to Córdoba and beyond.’

‘He called it after his favourite concubine, didn’t he?’ Ahmed said with a smirk, urging him to get to the more interesting details.

‘His favourite concubine was certainly called al-Zahra and he lavished every possible luxury on her so it is possible that that was why he called the city al-Zahra.  But do you know what else the name means?’

He looked at the boys, who shook their heads.

‘It means shining, glistening, brilliant.  Possibly his concubine glittered and shone with all the jewels and beautiful silks he showered upon her but then so did the city.  It was indeed the Shining City.  When visitors entered through the Grand Portico, passing beneath its enormous, red and white arches, when they climbed the ramped streets that were paved with blocks of dark mountain stone, passing the lines of uniformed guards in their scarlet jackets and the richly robed civil servants that flanked their way, when they reached the royal residence and saw the golden inlay on the ceilings, the marble pillars, the richly woven rugs scattered across the floors and the brilliant silk tapestries, when they saw the moving tank of mercury in the great reception pavilion that caught the sunlight and dazzled all who beheld it, then they indeed knew that they were in the Shining City.’

It was a shame that his nephew had never been to Madinat al-Zahra and probably would never go.  Soon the city would be as if it had never been, its stone buildings returned to the rock from which they came.

‘But they say that he loved his concubine more than anyone else,’ said Musa.

‘Maybe.  Who knows what goes on in the hearts of men, even less in the heart of a Khalifa.’

‘They say she was the most beautiful woman in his harem.’

‘Who was she?  What was her name?’ asked Ahmed.

He could still feel the pain as he said her name.  The boys waited, eyes wide in anticipation but Omar did not elaborate.

‘Did you ever see him?  Did you see the Khalifa?’

He could see the disappointment in the boys’ eyes.

‘But he was a good-looking man, with white skin and blue eyes,’ he added.

‘Of course he was.  Who else but an Arab could be Khalifa?  But his mother was from the north.  She was captured from one of the ruling families during the war and became his father’s slave and concubine.  Abd al-Rahman inherited his fair skin and hair from her.’

‘I heard that he used to dye his beard,’ Ahmed said.

‘Yes, I believe he did.  He wanted to look more like his subjects.’

‘Tell us more about the harem,’ Musa insisted.

‘What can I tell you?  There were hundreds of beautiful women, trained in all the arts of love and music; they knew a thousand and one ways to please their lord and master.’

‘Of course, who else?  Every woman who entered the Khalifa’s harem belonged to him and no-one else.’

As he said the words, he could hear the bitterness creep into his voice.

‘Indeed they were.  Even if one of them wanted to leave she could not.  The Khalifa would never permit it.’

Before the boys could start another stream of questions, he said, ‘Here, eat your churros and then you should be off.  Is there no school today?’

He saw Musa blush.  His nephew was a good boy and not able to tell a ready lie.

The boys picked up the churros, doused it with honey and crammed it into their mouths.

Omar watched the boys skip down the road.  If they hurried they would be in time for the first lesson of the day.  He wished he had asked them what they were being taught these days.  When he had been at school the curriculum was very strict: reading, writing, geometry, arithmetic, the Quran and the sayings of the Hadith.  Everything in Arabic of course, although not many spoke it in the streets in those days; people retained the habit of speaking a variety of the local language among friends and family.  That was normal.  He signalled for the waiter to come over and paid him for the tea and churros.  It was time he took some exercise.  His doctor had said it was important to walk every day even if his knee was paining him.  He would walk across the old Roman bridge and see if there were any fish in the river this morning.  It was his favourite walk these days because he would stop half-way across and look back at the city of Córdoba and its beautiful mosque, towering against the skyline.  This ancient city was once again the centre of power, his beloved Madinat al-Zahra abandoned and neglected since the young Hisham II had inherited the throne.  Today the boy-Khalifa was isolated in Madinat al-Zahra, alone, living the life of a recluse, his city crumbling around him.

As he stood up a sharp pain shot through his knee and up his thigh.  He grasped the ebony stick that he always carried with him these days and used it to propel himself forward.  A wave of longing for his old home leapt to his breast.  It had been years since he had visited Madinat al-Zahra yet there was never a day when he didn’t dream of its beautiful palaces and its fragrant gardens; when he closed his eyes he could still hear the sound of the fountains that fed the tranquil lakes and smell the orange blossom that used to grow outside his house.  But he knew he could never return; the pain would be too great.  The city lay only a couple of Arab miles to the west of Córdoba and yet it might as well have been in distant Arabia.  Yes, there were many tales he could tell Musa about his days in Madinat al-Zahra.