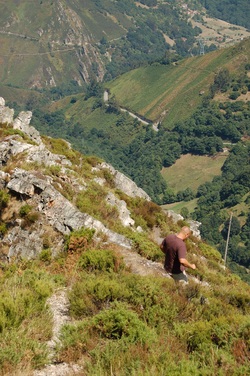 
A couple of years ago I got the idea of writing a novel about a woman walking the Camino de Santiago, the ancient pilgrim route across the north of Spain to Santiago de Compostela.  I had visited the city of Santiago during the summer of 2010 in what, I later realised, was a Holy Year.  Holy Years occur whenever St James’ Day, 27th July falls on a Sunday, ever six, five, six and eleven years, in that order.  The last Holy Year was 2010 and the next one will be in 2021.  Knowing nothing about the pilgrimage I was amazed to see how many thousands of pilgrims descended on the city and its cathedral.  Although nowadays pilgrims from all over the world make the pilgrimage to Santiago every year, Holy Years remain special because the Church can award plenary indulgence to anyone completing the pilgrimage in those particular years.  These indulgences were first offered in 1095 for Christians who died on a pilgrimage to the Holy Land.  Then, in the14th century, documentary evidence tells us that they were extended to anyone making the pilgrimage to Santiago de Compostela during a Holy Year.

The modern pilgrim who wants to walk the Camino de Santiago (or the Way of St James as it is also known) has a number of routes open to him: Camino Francés, Camino de Madrid, Camino Portugués, Camino Inglés and more.  The most popular one is the Camino Francés, 790 kilometres from St Jean in France to Santiago.  This is the route I chose for my heroine, partly because I had the good fortune to meet a woman who had just completed the walk herself and partly because it runs through some impressive countryside.  At 76 years of age, June had walked the 790 kilometres in five weeks, on her own.  I was impressed.  Apart from a couple of occasions when she had arranged for her luggage to be sent on ahead of her, she had carried everything in a small rucksack on her back and she had slept in the cheap and cheerful hostels that line the route.  In order to stay in these hostels you have to present your credencial, the pilgrim’s passport that you collect before you start the pilgrimage.  The owner of the hostel will stamp the passport to prove that you were there. Some of these hostels charge as little as five or ten euros a night, but you have to be prepared to use communal showers and share rooms with complete strangers.

I talked to June about her experiences on a number of occasions and gleaned from her all those interesting, small details that were necessary for me to bring my story to life: the sore feet, the bedbugs, getting lost and most of all the people she met and became friends with. 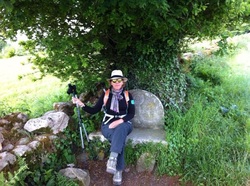 More recently a group of my friends decided to walk the Camino but, being working women, they could not take five weeks leave to do it, so they started at O’Cebreiro in Galicia and walked from there.  Theirs was an alternative approach: they booked small hotels in advance instead of staying in the hostels and albergues and they had their luggage transported from one hotel to the next each day.  But they were still required to have their pilgrim’s passports stamped in order to receive their compostelas.

Both approaches will qualify you to collect your compostela or Pilgrim Record, a certificate that shows that you have walked at least 100 kilometres of the Camino and that your pilgrimage was made for spiritual reasons.  If you have other reasons for doing the pilgrimage they will award you a certificado, to prove that you have completed it.  Both can be collected from the Pilgrim’s Office near the cathedral.

The climax of the pilgrimage is, of course, arriving in the city of Santiago de Compostela in time for the 12.00 mass in the cathedral; this is held every day.  Even if you are not religious you cannot help being impressed by the cathedral with its Baroque facade and the relics of St James that it houses.  During the mass, while a nun sings in Gallego, a huge silver thurible containing burning incense is swung above the congregation; this is known as the Botafumeiro and was thought to have been originally used to kill the awful stench of hundreds of pilgrims who had been walking for weeks and months.

The main entrance to the cathedral is through the Portico de Gloria.  On the north side is the Puerta Santa, Holy Door, which is opened on the eve of each Holy Year, 31st December and walled up again a year later. 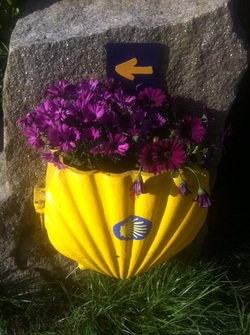 A few tips for walking the Camino:

1 It goes without saying that comfortable walking shoes are a must and make sure you break them in before you leave.

2 Care of your feet is essential, so put a tube of vaseline, some plasters and spare socks in your rucksack.

3 Unless you plan to send your luggage ahead each day, take the absolute minimum – aim for a maximum of 5 kilos.  That rucksack will get very heavy after a few hours walking.

4 Take a hat to protect yourself from the sun.

5 Be prepared for all kinds of weather – Galicia in particular can be wet.  A lightweight poncho is ideal.

6 Learn a little Spanish and you will get more from the experience.  If you really want to get away from everything leave your watch, mobile phone and camera at home.

7 Don’t take unnecessary items – there are plenty of shops on the way, including chemists.

8 Choose your season carefully – spring and autumn are best; the summer can be very hot and crowded and in the winter it can be cold and wet.  There’s even snow on the high ground.

9 Always carry some water with you.

10 And remember to pick up your Pilgrim Passport – the credencial – before you start and get it stamped at every stage of your pilgrimage.  This can be obtained from the pilgrim office in Roncesvalles or from the Confraternity of St James in London

For anyone contemplating doing the pilgrimage themselves, I recommend the excellent guide book by John Brierley, ‘A Pilgrim’s Guide to the Camino de Santiago’ ISBN 9 781844 09 1928.  It is full of useful information for the trip itself and the preparation beforehand.

The novel I eventually completed was SANTIAGO TALES, a story inspired by the classic book Canterbury Tales, where each pilgrim has a tale to tell.