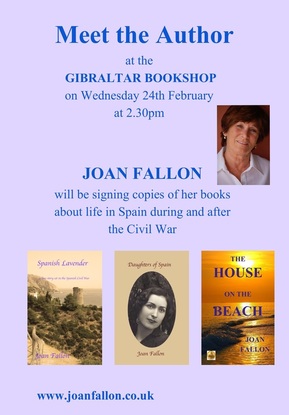 2016 is the 80th anniversary of the start of the Spanish Civil War. To commemorate the event, the people of Gibraltar are holding an exhibition about the war in Casemates Square all this week. The theme of the exhibition is the Civil War and its impact on Gibraltar and its people.

As part of that exhibition I have been invited by the Gibraltar Bookshop to put on a display of my books and meet the public.

My novel Spanish Lavender is set in Málaga in 1937, just a few months into the war and is about a young English woman who flees to Almería, along with thousands of other frightened people trying to get to safety behind the Republican lines. Her parents want her to accompany them to Gibraltar where they will be shipped home to England and safety, but she refuses to leave and prefers to take her chances in the besieged city.

When I interviewed women for my book Daughters of Spain, some of the older women had been alive during the Civil War and their first hand stories of what it was like at the time are fascinating to read.

The third book, The House on the Beach deals with the aftermath of the war, a difficult period for a lot of people for many years. It shows how numerous people still lived in fear of their pasts being discovered, even though the country was supposed to be at peace and how many had to flee to other countries in order to escape prison or death.