I realised the other day that I have completed twelve books during the time I have been writing professionally—now ten years—and that my books fall neatly into two separate categories. There are those that look to the past and those that are firmly grounded in the present. What is more, I seem to have spent a great deal of my energy promoting the former to the detriment of the latter. I enjoy writing historical fiction and have found pleasure in reading books by Hilary Mantel, Anna Belfrage and am now looking forward to JG Harlond’s latest novel in The Chosen Man Trilogy, A TURNING WIND—due out next month. However, to be honest, most of what I read is contemporary or literary fiction—or, in other words, it doesn’t seem to slot into any particular genre.
So I had a hard look at the six books I have written which aren’t historical fiction. They all have one thing in common—they are about women. Women are resilient. I won’t go so far as to stick my neck out and say ‘more so than men’ but without a doubt they are resilient. You can throw anything at them—divorce, abuse, a glass ceiling, the loss of a child, death of a spouse—and most women will fight back. They will take up the challenge and refuse to be cowed. And that is what I portray in my contemporary novels. These are stories of transformation, women rebuilding their lives and their relationships.​

In LOVING HARRY, the story of two women who love the same man, Barbara’s life is shattered when her husband leaves her and her two children for Carla. But she rebuilds her life, changing from a stay-at-home housewife into a successful business woman. Carla, on the other hand finds that life with Harry is not what she expected. After they move to Spain, he begins to drink heavily and she has to cope with his transformation from a fun-loving companion into a morose alcoholic. Both women, in different ways, bounce back from the adversity in which they find themselves.

​Beth, the main protagonist in SANTIAGO TALES, has cancer, her job is going nowhere and her husband has been leading a double life. What does she do? She decides to leave everything behind and go on a pilgrimage to Santiago de Compostela, in northern Spain. The people she meets on her journey help her to get her own life in perspective and she returns stronger and ready to face the future.

The novel THE THREAD THAT BINDS US is the story of a woman approaching retirement. On the face of it, she has everything—a loving husband, a son, three grandchildren, a lovely home and a successful career. But she is unable to enjoy it all. Her boss, who is half her age, wants rid of her. Her son finds her cold and aloof. Her life seems empty. Then she finds that her parents had been keeping a secret from her all her life and that she has a half-brother she had never heard about. She becomes obsessed with finding him and when she does all their lives are changed.

Nancy is an old woman, whose memory is failing her. Once she was a famous artist and lived a glamorous life. Now she sits in her flat in Marbella, looking at the sea and waiting to die. PALETTE OF SECRETS is the story of her life, much of which was far from glamorous, and how she escaped from an abusive husband to build a new life for herself and her son.

In my latest novel, LOVE IS ALL—due to be published in the summer—Teresa has even more to contend with. After a serious car accident she awakes from a coma to discover she has Locked-In Syndrome and is unable to communicate with any of her family. Not only that, she is unable to move, to eat, to speak or do any of the things she could do before. All she can do is blink. She doesn’t want to live, but she is unable to die. She withdraws into a private world where she can pretend that life continues as before and she ignores those who are trying to help her. Although she has shut them out, her family won’t give up on her. Teresa has a secret that her family know nothing about and when her son discovers it she finds herself being brought into the real world once more. It is love, in all its forms, that finally saves her. 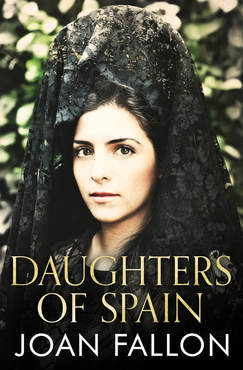 The last book I want to mention is not a novel. DAUGHTERS OF SPAIN is a collection of interviews with Spanish women, people I met and who were happy to tell me about their lives. I started this blog by speaking about resilience, well these women showed plenty of resilience in the face of adversity. I spoke to a woman who wasn’t even allowed to put her name on her child’s birth certificate because she wasn’t married to the father; she had no rights over her own daughter. They lived at a time when women’s rights were few; women were under the control of either husbands or fathers. In the period after the Spanish Civil War everyone’s lives were strictly regulated by the power of the State, the Church and social mores. But few of the women I spoke to had bad memories of that time. They had survived.

​The emancipation of women didn’t begin and certainly didn’t end with the Suffragette movement. You only have to turn on the television or read the newspapers to see that it is still going on.