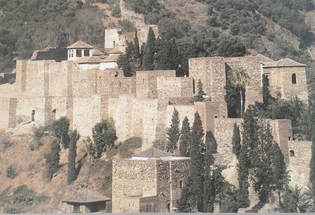 The alcazaba in Malaga

Work on my latest series of historical novels is progressing well. I have had a change of heart about the name of the series, which I now think will be called City of Dreams. The city in question is Málaga (or Malaqah as it was called in the 11th century) and in its way it was a city of dreams; like many other cities in the world then and since, people flocked to it looking for a better life. After years of civil war, the Umayyad dynasty had crumbled and al-Andalus had fragmented into a number of small independent city states called taifas. The taifa of Malaqah was one of those. The first book in the series, The Apothecary, is with my editor now, and I hope to have it published early in the new year. More on that later. 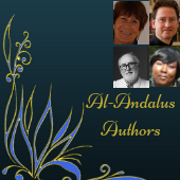 As I mentioned some months ago, this year I have joined forces with three other writers of historical fiction to do a few joint promotions and the reason we feel that this is to our mutual advantage is because we all write about the same historical period: Muslim Spain. There are a lot of benefits to this exchange of ideas. We are two men and two women; two of us are British and live in Spain all or part of the year, one is an American professor (although not of history) and the other is from Barbados. More importantly we all bring differing strengths to the table – David is a best-selling author of crime fiction and can teach us a lot about marketing, John’s knowledge of the period is extensive and Lisa is a whiz kid at social media and has set up our first news letter. I’m sure I contribute in some small way, but I’ll leave that for them to comment.
​As for the newsletter, as this is the first, hopefully of many, we have all tried to put into words why it is we write about Muslim Spain and not Saxon Britain, or the American Civil War, for example. 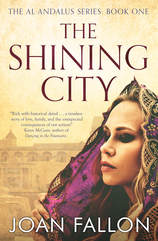 Why Moorish Spain?
As I currently live in Andalusia, it seems only logical that I’m drawn to write about the area of Spain where the Moors ruled for over seven hundred years, but the truth is that I have been fascinated with Spain’s Moorish inheritance since long before I moved there. As a teenager I read a travel book by Alexandre Dumas entitled Adventures in Spain and was particularly fascinated by his account of Granada and the Alhambra. The details of the book are long forgotten but since then Spain has always been a land of colour, passion and vibrancy for me.
However the reason for leaving Britain and moving to Andalusia was much more mundane. Something of my interest in Spain must have rubbed off on my daughter because no sooner had she finished college when she announced she was going to live and work in Málaga. Within a few years, my husband and I had decided to join her in her new country and have never regretted it.
As I began to explore my new home I began to realise that there was even more to this country’s past than I had realised and I became particularly interested in its Moorish history. Everywhere I looked there was evidence of its Moorish ancestry, from the architecture and pottery to the food eaten – local dishes that hadn’t changed in centuries. Place names, irrigation systems, gardens and fountains, the language itself, all reminded me that this Christian country once had a very different past.
In the year 2000 I picked up a leaflet about an exhibition of Umayyad art that was to be held in a place called Madinat al Zahra, just outside Cordoba.  It was just a couple of hours away so we decided to go, although at that time I had no idea who the Umayyads were.  As I have subsequently discovered, the Umayyads had been the rulers of Muslim Spain for three hundred years.
The exhibition was excellent but I was more impressed by the site they had chosen for it: Madinat al Zahra.  This was a palace/city built by Abd al Rahman III just after he proclaimed himself Caliph of al-Andalus.  It was reputed to have been the most wonderful city in the western world and covered the entire hillside; 25,000 men worked on constructing it.  Abd al Rahman III himself had 400 rooms in the palace.  It was filled with marble and gold, exquisite engravings and silk hangings, a palace fit for a caliph.  It was said that 800 loaves of bread were used each day just to feed the fish in the fountains and lakes.  There are a number of theories as to why Rahman III built Madinat al Zahra at a time when Cordoba was considered the most splendid city in western Europe.  Why did he need another city?  Some say he built it for a concubine called al-Zahra, and named it after her.  Others said it was because he felt demoralised after being defeated by the Asturian king.  But recent research says it is much more likely that it was built to reinforce his position as Caliph and to promote his independence from both the old caliph in Baghdad and the new upstart Fatimids in North Africa.  Rahman III had converted al-Andalus from a collection of individual tribes into a centralised Arab state, proclaimed himself Caliph, the supreme ruler, and he wanted to make sure everyone knew who was the boss. One way to do that was to build a wonderful new city.
But what was much more fascinating to me was the length of time that the city was in existence.  Work was started on it in the year 936 and only 70 years later it was already abandoned, and falling into decay.  For the next thousand years it was looted, its beautiful buildings broken down and used as building materials.  There are pillars from the site in cities such as Malaga, Seville and in many homes in Cordoba; looting old sites for building materials was very common.  Not until 1911 was Madinat al Zahra rediscovered by archaeologists and work begun on protecting and excavating the site.
This was the city that inspired me to write the first novel in the al-Andalus series, The Shining City. It took many months of research to get started but the more I read about Moorish Spain the more interested I became in what life was like at the time and how their culture and learning has been passed on, influencing the lives of not only the Spanish but also the rest of Europe.
If you want to learn more about medieval Spain, there’s no more enjoyable way than to read well- researched historical novels. But then I would say that.