Even if you have never visited the beautiful mosque in the centre of Córdoba’s old city, you will have most probably have heard of it. While I was writing the al-Andalus trilogy, which was set in 10th century Córdoba, I visited it many times. It is a truly magnificent place.

The Mezquita’s fame is widespread, and its history stretches back to the time of the Moors in the 8th century. Work was begun in 785 AD, on the banks of the Guadalquivir, under the orders of Emir Abd al Rahman I. He had bought the site from the Christian community for 100,000 dinars. As was customary in the ancient world, he had chosen a site that already had religious connections; it had been a Visigoth hermitage, before that it was the site of a Roman temple, and from the middle of the 8th century, Christians and Muslims had both worshipped there. 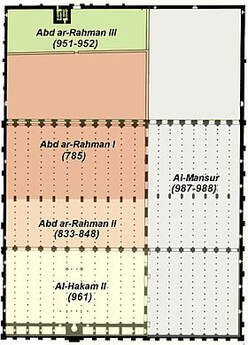 Plan of the Mosque showing when each part was built.
The Moors were a major presence in Spain for over 700 years, but this is the only mosque surviving from that period of history. It is also one of the largest—180m x 130m—having been extended by Abd al Rahman II in 833 AD to cope with an ever expanding population. His successor, Abd al Rahman III was too busy uniting the kingdom and building his new city in Madinat al Zahra to spend money on the mosque in Córdoba—although he did build the orangery.

So it wasn’t until after his death, that his son, al Hakam II undertook another enlargement of the mosque in 926 AD. Then finally in 987 AD, al-Mansor, the de facto ruler of al-Andalus after the death of Abd al Hakam, almost doubled the size of the building. Yet, despite so many additions to this magnificent building over a long period of time, the architects managed to maintain its structural unity.​ 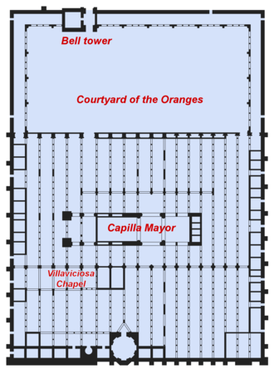 Plan showing the Christian alterations
Until that is, the conquest of Córdoba by Ferdinand in 1236, when the city was taken over by the Christians. In 1257 the Bishop of Córdoba decided to consecrate part of the mosque as a cathedral.

First-time visitors to the mosque are amazed to suddenly find themselves in a Christian cathedral. Sadly a lot of the additions to the mosque made by Abd al Rahman II and al-Mansur, were dismantled during the creation of the cathedral.

Further work was done to the cathedral in 1523 under the orders of the Bishop and without the consent of the Cathedral chapter. They tried to stop any further changes by threatening them with the death penalty if they did any more work without Royal assent. So the bishop appealed to King Charles I, who  gave his consent.
​
​According to rumour, when the king later visited the cathedral, he is reported to have said: ‘I did not know what this was, otherwise I would not have allowed the old part to be changed; because you are doing what can be done elsewhere, whereas you have destroyed something that is unique in the world.’ 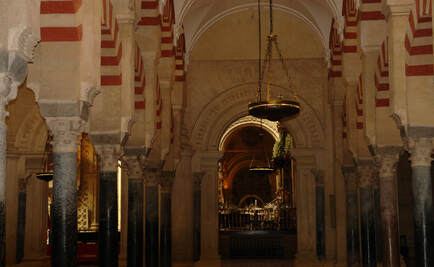 That was almost five hundred years ago and yet still there is a dispute between the citizens of Córdoba  and Church over the great Mosque. A law passed in 1946, during the Franco regime allowed the Catholic Church to acquire thousands of properties in its name. In 1998, the government of the day extended this right to cover places of worship, and the Church swallowed up hundreds of cemeteries, chapels and cathedrals. One estimate is of 4,500 properties. But the most controversial was in 2006, when the then Bishop of Córdoba registered the Mezquita as the property of the Catholic Church, and paid the sum of €30 to do so. It was an attempt by the bishopric to wipe out all traces of Córdoba’s Islamic past and their justification for doing this was that in 1236 Ferdinand III of Castile had decided that the site of the Mosque should be “consecrated and converted into a cathedral.” 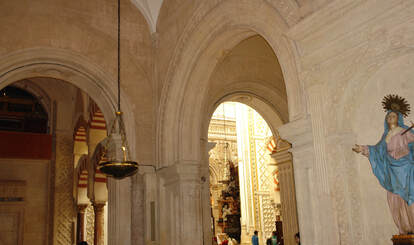 ​But the citizens of Córdoba are not happy. The Mezquita, which was declared a World Heritage Site over thirty years ago, is one of the biggest tourist attractions in Spain. Despite formal complaints by angry citizens, the Spanish Heritage office ruled in 2014 that the Church had done nothing wrong. Then a few years ago the Andalusian regional government commissioned a report on whether it could request the rights to the management of the property.  I was unable to find a copy of the report but a summary of its conclusion states that a monument of such national significance cannot be owned by any individual or institution. This puts the Church’s position in jeopardy, but I couldn’t find anything to say that things had changed.
​
A number of organisations, such as the Navarre Heritage Defence Platform are leading the fight to overturn many of these unconstitutional registrations by the Church.

If anyone has any recent news about the ownership of the Mezquita, please let me know. 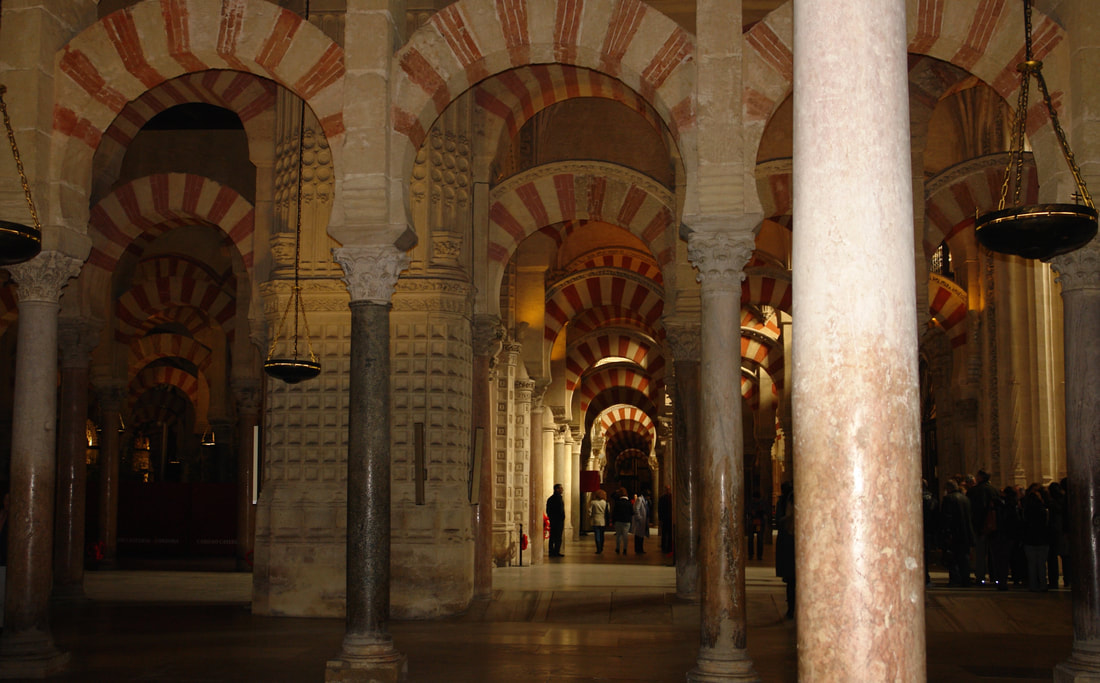