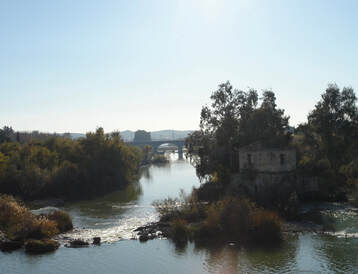 Q  As-salama alaykum, Makoud.
A  Peace be upon you also.

Q  Can you tell me a little about your life. How did you become a successful apothecary, a man respected by the Royal Household here in Malaqah?
A  It’s a long story. I am not originally from this taifa. When I was born there were no taifas; Qurtubah, my home city,  was the capital of al-Andalus and the country had only one ruler, the khalifa al-Hisham II. Now al-Andalus is split into many small taifas and each one is ruled by its own prince.

Q  What was life like in Qurtubah when you were growing up?
A   At first life was good. I had a normal childhood; I went to school, I attended the mosque on Fridays with my father and my brothers and I played with my friends. There was plenty of  food and people could wander about the city and feel safe. Qurtubah was prosperous and well known for its wonderful libraries. People came from all over the world to visit the city. My cousin, Salma, was a scribe and worked in one of the libraries. It was a peaceful place to grow up in and I was a happy child. We lived in a lovely old house by the edge of the river Guadalguivir with my father and mother, my grandmother and my brothers and sisters. I used to fish in the river with my father. I was the youngest of the family, and both my brothers were working, so they didn’t have much time for me. One was a doctor and the other was a soldier. 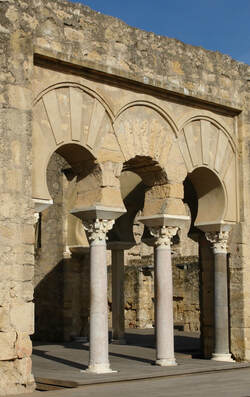 The ruins of Madinat al-Zahra
Q  I believe your father was a good friend of the khalifa.
A  Yes, my father, Ahmad, became his personal falconer when he was still an apprentice in Madinat al Zahra. He taught the khalifa, who was younger than him, how to hunt with the falcons and care for them. They remained friends for a while until my father moved to Qurtubah and got married. But he always considered him a friend and was loyal to him when everyone else deserted him.

Q  I am surprised that you didn’t become a falconer like your father.
A  My father would have liked that but I wanted to be a soldier, like my brother and my grandfather.

Q  So what happened?
A  My mother forbade it. She said that one soldier in the family was enough; she wasn’t going to lose two sons to the army. So I began helping my great-aunt, Layla. She knew so much about plants, especially herbs. She taught me which ones to use for healing and which to use for fragrances.

Q  And cooking?
A  Yes that too but I was more interested in their other uses. Many are poisonous if used incorrectly. They have to be picked at a certain time, dried in certain ways, prepared carefully. I found it fascinating, so I began to study as an apothecary.

Q  Was that in Qurtubah?
A  No, by then we’d moved to Ardales. Qurtubah was in ruins and the khalifa was in prison. We were lucky to escape with our lives. The city had been under siege for two years and people were starving. A terrible sickness had swept through the city and killed many people, but we were fortunate not to catch it, probably because my brother who was a doctor, gave us good advice. He adopted a system of quarantine at his hospital and gradually they got the disease under control. 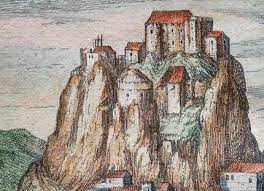 Ardales
Q  So what happened to you next?
A  Well, as I said, the city was surrounded by Berber soldiers and the khalifa was powerless to do anything. Things looked very bad and then the governor of the city decided to surrender. It was a mistake. The soldiers slaughtered thousands of the citizens and sacked all the libraries and universities. Nothing remained. We grabbed what few possessions we could carry and my family and I escaped.

Q But how? Why weren’t you and your family killed by the soldiers?
​A  I suppose it doesn’t matter now if I tell you what happened: we escaped through an old tunnel under one of the Christian churches. My cousin’s friend, who also worked in the library, told her about it. Once we were out of the city we headed straight for Ardales, because my father had some relatives there. It was a long journey and we were terrified of being caught by the soldiers but once we were there we were safe. I continued to study with Layla and eventually began to work as an apothecary.

Q That doesn’t explain how you came to be living in Malaqah and how you are so well respected at court.
A  Ardales was a very sleepy little town. I tried to settle down there, to please my parents, but I was restless. I married a lovely girl and she gave me the most beautiful daughter in the world. I should have been content with what I had but I wanted sons. Every man must have sons. But Abal, my wife, had almost died when my daughter was born and because of that could bear me no more children. The law would have allowed me to divorce her, but I couldn’t do that. I loved her. So I took a second wife and she bore me three sons.
​
Q  So it worked out well for both of them.
A  Not really. They are jealous of each other and bicker all the time. Basma is jealous of Abal because she is wife number one, and Abal is jealous of Basma because she had three sons. I try to keep out of their way as much as possible. When my mother was alive they kept their jealousy to themselves, but now Abal is in charge, it is impossible to control them. 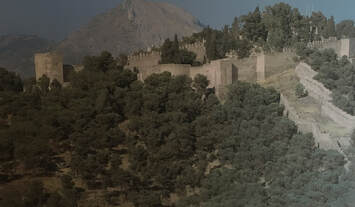 Q But weren’t they happy about moving to Malaqah?
A  Not at all. But for the first time they could agree on something, and that was that I was making a huge mistake. But I’d been itching for a chance to leave Ardales for years; I felt that I was growing old too quickly living there. I needed city life again. So when my son-in-law died of the sickness, I decided it was time for the rest of the family to move to Malaqah and have a new life. My sons needed work and there wasn’t much for them there. I had a Jewish friend who had moved from Qurtubah to Malaqah some years ago and by chance I heard that he was still living there, so I got in touch with him and he helped me to find a suitable shop to set up my business.

Q Right outside the alcazaba?
A  Yes, it is in a perfect spot and I have many customers who are from the palace. But it is not without its disadvantages.

Q  Such as?
A  You asked me how I am so well known at court, it is because of something that happened not long after I arrived in Malaqah. The khalifa died in mysterious circumstances and it was rumoured that he had been poisoned by poisonous herbs from my shop. It’s a complicated story, but with the help of my sons I was able to disprove the rumour and help them identify the khalifa’s killer. I and my family have been well treated by the royal family ever since.
​
Q  Do you have any regrets about moving here?
​A  Absolutely none. It is a vibrant and cosmopolitan port and I love living here. My sons have made good livings and soon I hope that the eldest will be married. In a few years I will retire and my second son, Ibrahim, will take over the shop, and hopefully his son after him. Despite what my wives say on the matter, I know I made the right decision by moving to Malaqah.

NOTE:
Makoud is the main character in the first novel in the City of Dreams series, The Apothecary.

I have used the Moorish names for Málaga and Córdoba as they were at the time.

Books 1 and 2 of The City of Dreams series are available on Amazon.

Book 3, The Scribe will be out in the Spring.